Have you ever heard a coyote bark?

A juvenile coyote vocalizes nightly for over a week, to a silent night sky calling out to family members without any response. The barks and intermittent howls have gone unanswered. This area is heavily hunted 365 days a year including the use of deer remains bait piles and other anthropogenic food attractants. In all reality his/her relations are gone. We have not observed any members of this family for quite some time.

Coyotes are family oriented canids that form deep social bonds. The alpha mated pair co-parent and provide the vital nourishment and survival training and protection for their vulnerable pups during their important developmental phase.

In most of Ontario, coyotes have no protection including during critical times of their family life cycle. Raising pups during the spring and summer and throughout the mating season which typically takes place in late winter in an established territory. Coyotes and their young are shot or trapped with little accountability regardless of whether there are pups in the den.The photo below is of newly born pups whose parents were shot and killed. These pups would have succumbed to starvation, exposure to the elements and possible depredation if a kind citizen had not come forward. 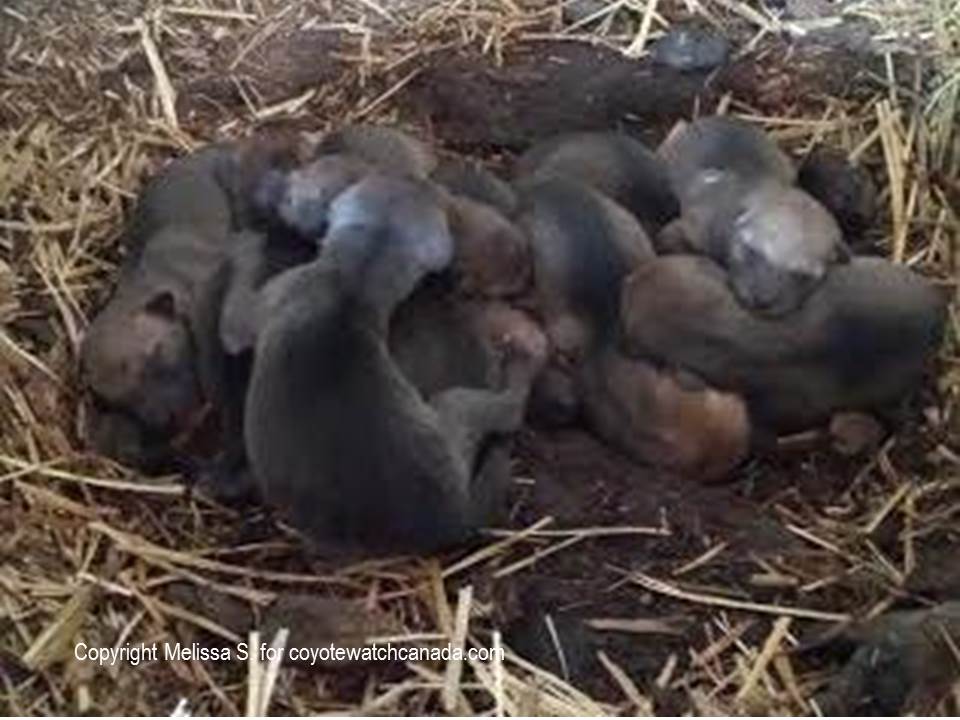 'Open season' refers to the regulations that dictate when wildlife can be killed. In the case of coyotes, this species can be hunted every day. The only protection for eastern coyotes receive is through hunting and trapping regulations of the Ontario Ministry of Natural Resources and Forestry (OMNRF). Eastern coyote protection falls under the WMU (Wildlife Management Units) where there are genetically distinguished Algonquin wolf and eastern coyote distribution. Both species resemble one another and thus correct identification is impossible without DNA analysis. This has implications for the hunting and trapping of the Algonquin wolf.

This inherently cruel and scientifically void mismanagement is not only destructive to coyote families but the continued en mass slaughtering of this keystones species impacts the very ecosystems in which they live. Destabilizing territories and the pack hierarchy, policies that support closed seasons on hunting and trapping are needed. Other considerations for the limitless killing of coyotes; rodent populations increase, tick host species persist and the prey/predator balance is compromised. Preserve and protect this essential species.

What can you do to help coyote families?

Three easy ways to do your part: