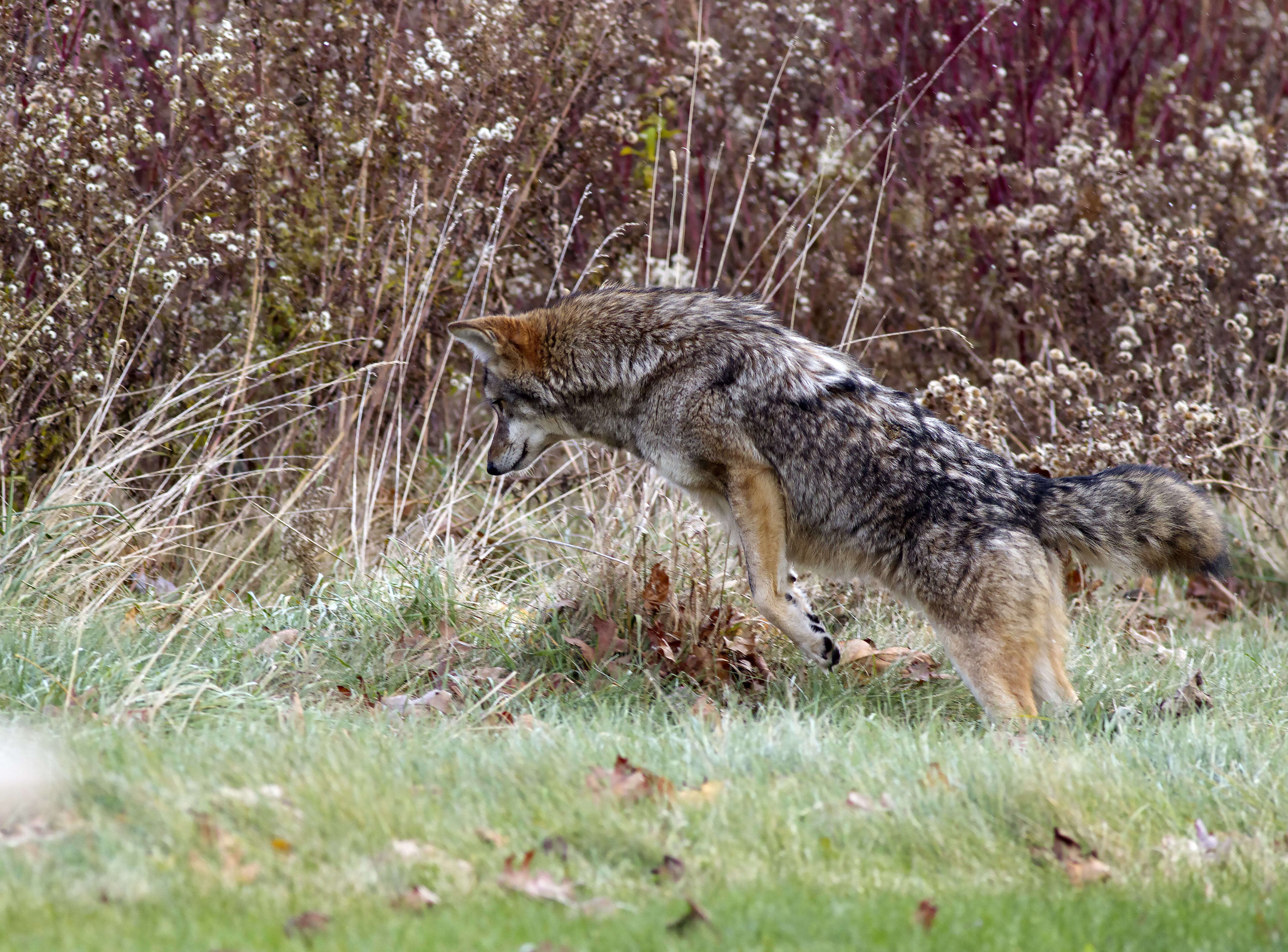 What do I do if I see a coyote?

Seeing a coyote should not be cause for alarm. Like all other urban wildlife, they’re looking for food, water, and shelter. However, if the coyote is approaching you or in an area that you’re not comfortable with (your backyard, a busy park), consider aversion conditioning (humane hazing) (see below) to scare it away. We recommend that apart from disclosing the location of the sighting to your local wildlife agency reporting system, or through our website, you keep that information confidential in order to protect vital wildlife habitats, den sites, and wildlife in general. Disclosing locations can also pose risks to local fauna and flora; may expose wildlife to cruel intentions, human feeding, disturbances such as photographers, photo-selfies, destruction of nests and dens, leaving designated trails, and increased proximity to people and dogs. Spring and summer months are vital pup rearing time. A dog venturing off-leash near a den site, chasing pups and adult coyotes will be perceived as a direct threat. Rendezvous sites are safe zones where the coyote parents leave the pups while they hunt. Leashing our family pets keep them safe and also protects young wildlife families that are vulnerable to domestic dog attacks.

Why are there coyotes in urban areas?

The Eastern Coyote is an extremely intelligent, family-oriented, and highly adaptive species. Since the 17th century, the landscape of Ontario has vastly changed, pushing out the natural species – bears, wolves, cougars and so on – and making a vacuum in the ecosystem. Coyotes are easily able to navigate urban landscapes and have filled the hole created in the ecosystem. There are plenty of natural food sources provided in urban settings such as rodents and rabbits.

Will removing food really stop them from coming around?

While coyotes passing through our areas are quite common, removing an active food source is one of the necessary components in keeping them at an ideal distance from humans. Available food – either intentional or unintentional – will attract many other wildlife species including coyotes and make them more comfortable around people. Coyotes will remain in urban areas, just as many other species of wildlife have, however ensuring they’re not getting hand outs (along with education, investigation and enforcement of appropriate by-laws) will help keep coyotes wild and away from people.

Coyotes are omnivores: they eat small rodents as well as local vegetation (berries, fruits, nuts). While they may not distinguish between a cat or one of their preferred prey species (such as rabbits or voles), they do not utilize domestic dogs as a common food source. Most often, dogs are seen as potential competition for food resources or as a threat to coyote families; a perceived danger to a mate and/or pups. A study in Chicago – and another in Canada – indicated that less than two per cent of their food source was domestic animals (and it was undetermined whether the scat analysis included carrion – animals that had already died).

What should I do if a coyote is watching me and my dog or children?

Coyotes are extremely curious and intelligent animals – they often watch the events happening around them, just as a tourist in a new city would. Young coyotes are immature and very puppy-like: children and the toys they play with (like balls) can lead a juvenile coyote into play behaviour. If you are concerned that a coyote is paying too much attention to your small dog or child, pick them up and begin making loud noises and/or throwing objects toward (but not at) the coyote to scare it away (see aversion conditioning or hazing). Never turn your back on any dog- domestic or wild and run. Maintain direct eye contact, use strong verbal cues such as yelling (no screaming) and slowly back away.

A coyote will not see a human as potential food – considering their usual prey is a mouse, vole or fallen crab apple. However, like any other species of canid (including your pet dog), they may chase something that runs from them. This is why it’s important to never run from a coyote – stand your ground, wave your arms, make loud noises, and/or throw objects toward (but not at) the coyote to scare it away. Coyotes that have been fed and associate humans with a handout may exhibit “demand” behaviour such as nipping or grabbing at clothing. When a coyote has been food-conditioned, meaning people have directly fed a particular coyote, they may not immediately move away from an area when aversion conditioning is deployed. It is critical to send consistent, firm messaging through voice and body gestures, that the coyote is not welcome. See 'Keeping Coyotes Away' for more helpful tips.

Can we relocate them, or keep them out?

Though we – residents – see the city as separate from nature, it has a thriving ecosystem that includes not only ravines and parks but streets, backyards, industrial parks, and construction sites. Relocating (or killing) coyotes is not recommended, difficult to accomplish and only a band-aid solution. Trapping a coyote, with the intention of euthanizing' does not address the inherent issues in a community that create conflict such as feeding, improper garbage disposal, and dogs off-leash. Removing a coyote opens up the landscape for another coyote or two to move in filling nature’s vacancy. Much like birds, squirrels, raccoons and other animals, they have found a permanent home in urban areas. Coyotes are beneficial to the eco-system as well; they are Mother Nature’s cleanup crew and help keep populations of rodents under control. Relocation is a problem as well since wherever the coyote is relocated may already have an established coyote(s) in the area, and territoriality can make survival very unlikely. Attempting to remove one coyote from an area can also separate a family unit, which can lead to a lack of critical education for young pups (as both male and female coyotes raise their pups together) and sadly even starvation.

If I feed them will they leave pets alone?

Unfortunately, no. As highly intelligent animals, coyotes will recognize that they are being fed by humans, which will result in them returning to the specific area and increase 'food conditioning' behaviour– or make them less cautious around people and properties. Feeding coyotes, even indirectly (by feeding birds, squirrels, chipmunks, you attract rodents, which are part of a coyote’s natural diet as adaptive omnivores), will encourage them to attend a specific area and while increasing a coyote's proximity tolerance to people and pets. Multiple studies from across North America show that feeding animals increases the likelihood of food conditioning and creates a greater chance of an encounter or conflict.

Why should I report someone feeding wildlife in my neighborhood, green space, or park?

Feeding wildlife can – and often does – result in an increase in encounters and/or conflict. From birds and squirrels to raccoons and coyotes, it puts the natural ecosystem in a state of flux. Feeding teaches the wildlife that people and their properties are valid and reliable food sources; we want them to rely on their instincts to avoid or disassociate humans with providing food. Human hand-outs are harmful and disrupt natural foraging and hunting behaviours. Often anthropogenic foods are nutritionally void, create health complications, and should never be used as bait to lure wildlife for photographs or a 'selfish selfie'.

What is aversion conditioning or humane hazing?

Aversion conditioning is a method of negative association – when a coyote (or another animal) is in an area we don’t want it hanging around in, like a backyard, scaring it away will make it less likely to return. By consistently doing this, they will be more likely to avoid that location in the future. Hazing can include making loud noises (yelling, not screaming), waving arms, popping open an umbrella, shaking car keys, throwing objects near, but not at, the animal, and snapping a large garbage bag filled with air. It is also commonly referred to as ‘aversion conditioning’, or ‘escape conditioning’. Hazing is only effective in the long-term if it is coupled with food removal and the other cornerstone components of the Coyote Watch Canada Wildlife Strategy Framework for coexistence (investigation, education, prevention, and enforcement). Coyotes should only be hazed if they are inappropriately encroaching on property or showing an increased proximity tolerance towards people.

Is it true coyotes are part wolf?

Eastern Coyotes share remnants of Algonquin (Eastern) wolf DNA. Scientists estimate that the initial cross-breeding of the species occurred approximately 100 years ago in northwestern Ontario. While today’s Eastern Coyote often looks wolf-like, it remains significantly smaller (on average an Eastern Coyote weighs 14-18kg – though tall, they are quite lean with full fur which tends to create the illusion of being larger than they are). The small amount of DNA they share with wolves does not affect their behaviour in terms of how humans can safely coexist with this highly adaptable, family-oriented, and intelligent native North American canid.

How can I minimize attractants?

There are several common things around homes that will often attract coyotes and other wildlife. To minimize these attractants, it is recommended that residents keep garbage, recycling and compost indoors until 6 am, keep meat and egg products separate from composting until it is set out, pick up and appropriately discard fallen fruit and berries, do not leave pet bowls (water and food) outside, close off any access to the underside of decks or sheds, clean grills, leave no food outdoors and ensure cats are kept indoors. Dogs (especially small dogs) should be kept leashed and supervised, especially at night. Overflowing bird feeders attract prey species and potentially invite coyotes to visit too. Clean up underneath the bird feeder and avoid throwing seeds on the ground. Consider putting away your feeder and naturalizing the property with indigenous flora that will encourage wildlife. Predatory birds such as owls, hawks, and eagles are also attracted to prey that frequent bird feeders which puts free-roaming cats and small dogs at risk of predation by these species. Wildlife requires shelter, food, water, and habitat. Sealing up under outbuildings, decks and sheds removes the den site appeal for coyotes and other wildlife.