Breaking down the coyote mating meme 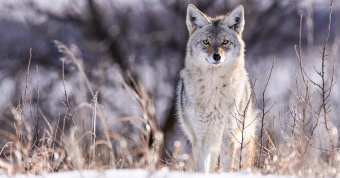 If you’re friends with a pet owner, dog walker, or maybe even just someone who’s a fan of clicking the ‘share’ button, you’ve likely seen the post below. It states that coyotes are actively mating, and that they become more aggressive at this time of year. Further, it implies that coyotes will draw dogs to an awaiting pack to kill them.

There is some truth in the post: coyotes are mating this time of year. However, they’re monogamous – so only young coyotes will be seeking a new mate. The gestation period is roughly 60 days, give or take. And loose dogs can come into conflict with coyotes (as well as other wildlife to whom dogs are seen as predators or risks toward). That’s about where the facts of this post end, and the sensationalism and disinformation begin.

This post indicates that an individual coyote will encourage a dog to chase them, then slowly lead them back to a pack (who is waiting for your dog). This is a wildly inaccurate assessment of canine behaviour, both for domestic dogs and for coyotes. What has been documented is dogs chasing or harassing wildlife of all sizes and stripes – loose dogs can pose a major threat to other animals.

Coyotes are naturally curious, and an essential part of their ecosystems. They will watch a dog and determine if they are a threat (that’s the long stare you may hear about). But if chased by a dog, which is what dogs often do, they will return to the safety of their family – just like you would if you were being chased by a predator. At that point, a coyote family may defend themselves, their territory, their den, or a food source from a predator or invader. This is not luring or some form of trickery, but very simple cause and effect initiated by a loose dog chasing wildlife.

Male coyotes do not become more aggressive this time of year. Both coyotes in a mated pair will protect each other, their territory, their resources like food, and their den or pups. The role a dog or human play in this is entirely on humans – not coyotes. This photo is deeply upsetting to those of us who have seen the original photo series. While it may appear to be a coyote attacking a dog and grabbing his collar, the full, uncropped series of images shows a coyote trapped against a fence line by their back leg. Three dogs are attacking and snapping at the coyote (the photo showing a third dog is not shown below due to its graphic nature), and there is evidence that they have bitten them on the hind quarters. This is not a coyote attacking – it is a coyote desperately defending themselves against three dangerous predators and the human who trapped the coyote. This is animal cruelty – and it’s been shared and promoted by unknowing animal lovers across the internet. If you love animals – be it dogs, coyotes, cats, bears, or even guinea pigs, please consider deleting your share of that original post and sharing this one instead. You can also share this post into the comments of friends who have posted the original meme.

Knowledge is an essential step on the path to compassionate co-existence and co-flourishing, and it starts with you.

This blog was co-authored by Coyote Watch Canada and our friends at The Fur-Bearers.