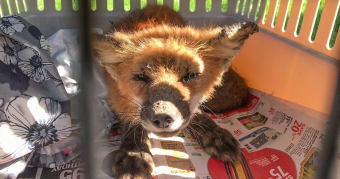 Coyote Watch Canada's volunteers are proud to have helped a team of volunteers from multiple organizations capture a fox suffering from mange in Erin, Ontario recently.

As reported by the Erin Advocate, at least one fox with an apparent case of mange was spotted in the small town for weeks; individuals feeding the fox(es) had hindered efforts to rescue them. However, the tenacity of CWC volunteers, who were on site for a month, along with the Guelph Humane Society and Toronto Wildlife Centre paid off, with one fox being successfully caught on September 14, 2019. They will be treated by licensed wildlife rehabilitators for mange and any other injuries then released. One or two foxes may be present based on reports, and CWC with partner organizations are reminding residents to not chase or try to feed the foxes.

Below: video of the capture!

#Repost @beckyloveswildlife with @repostsaveapp ・・・ Concerned residents in Erin, Ontario, reached out to @the_ghs after noticing that some of their community's foxes appeared to be thin, itchy and losing fur. The humane society noted that these foxes were suffering from sarcoptic mange and began tracking sightings. GHS's wildlife care attendant, Erin Longo, reached out to @coyotewatchcanada for assistance with potential rescue efforts. I offered to lead the rescue on behalf of CWC and worked with the community to track travel routes and set humane traps. Unfortunately, these foxes are accustomed to being hand-fed by residents around town and weren't willing to risk going into our traps for food when they could get it elsewhere, risk-free. This meant that we needed a rescue team on the ground. By last week, we had consistent sightings of one particular fox frequenting the east end of town multiple times daily. I reached out to @torontowildlifecentre, who generously agreed to send two members of their rescue team to assist in a co-ordinated rescue effort. On Saturday, all three organizations - Coyote Watch Canada, Guelph Humane Society and Toronto Wildlife Centre - worked together to capture this little guy. He is now in the care of the rehabilitation experts at Toronto Wildlife Centre and will be returned to the wild when he has recovered. There is still another fox with mange in need of rescue. Updates on that animal will be shared soon. Thank you to all of the caring citizens who have reported sightings, granted us access to property and worked with us to make this rescue happen. #redfox #vulpesvulpes #coyotewatchcanada #guelphhumanesociety #torontowildlifecentre #erinontario #wildliferescue #wildliferehab #sarcopticmange #dowhatyoucan #whatdoesthefoxsay