The Coyote~Wolf~Bear Education Initiative is a partnership with a shared vision of bringing wildlife coexistence strategies to communities across Ontario.

To foster coexistence, we are committed to providing the public, elected municipal leaders and other community stakeholders with effective tools to navigate the science behind wildlife biology in real-world scenarios. We can provide accurate information about behaviour, risk management and non-lethal conflict solutions that support people, coyotes, wolves and bears inhabiting a shared landscape.

Budget cuts continue to limit the provincial government’s capacity to engage directly with concerned citizens to solve and mitigate wildlife conflicts with programs such as Bear Wise. Urban and rural entities are now forced to assume responsibility for managing wildlife interactions without preparatory training or a solid background of science-based mitigation methods.  This highlights the need for more innovative and progressive educational outreach such as the Coyote~Wolf~Bear Education Initiative.

As paradigm shifts in conservation science bring ethics to the forefront of wildlife management, we underscore the importance of minimizing wildlife encounters.  Facilitating non-lethal, sustainable strategies for communities through education promotes awareness and appreciation for wildlife. Removing the 'mis' from misinformation. Learn more at Coyote Wolf Bear Education Initiative. 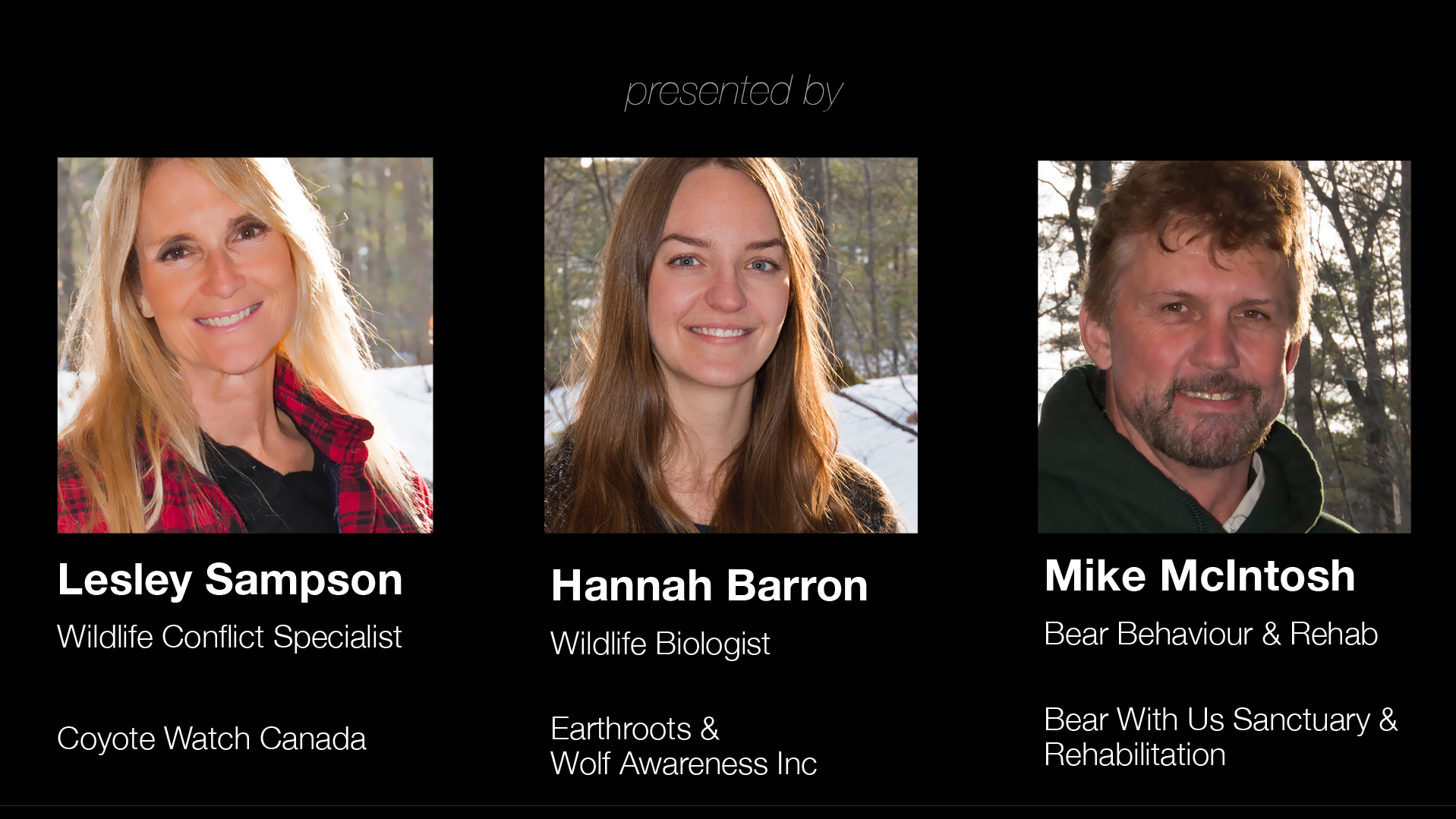 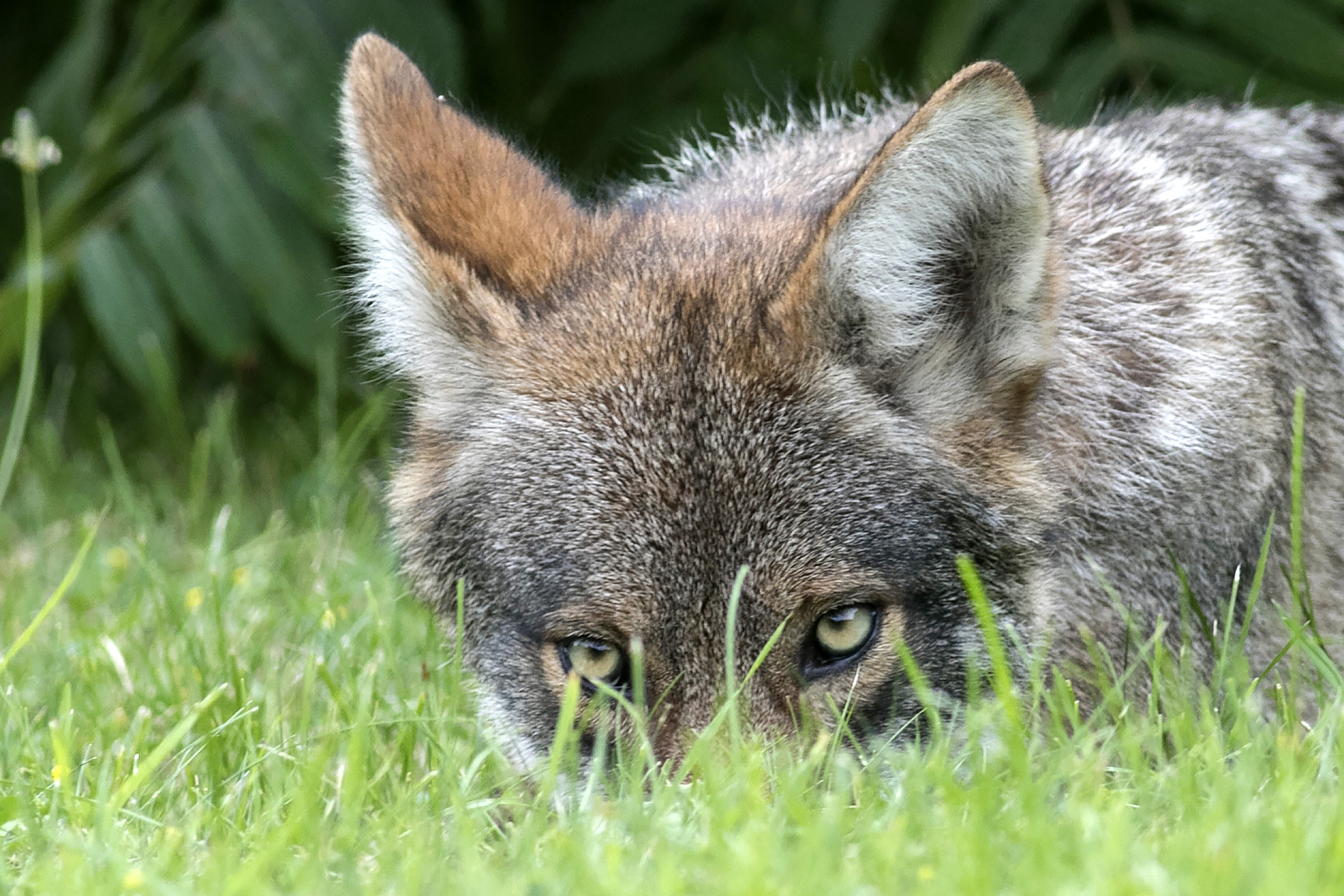 Coyotes are the epitome of a reliable “eco-thermometer” for any community in which they inhabit. Coyotes put us all on notice when they get too comfortable around people because of human indifference and misunderstanding about this family oriented, social and highly adaptable canine. In other words, when communities experience conflict, much can be learned from the presence of coyotes on how to become better stewards and citizens. Coyotes, a keystone species, are one of the most persecuted animals in North America. With little protection through lethal management policies, coyotes are destroyed without any policy accountability. Known as North America’s song dog, their brilliant vocalizations have graced ancient lands since the Pleistocene era. Coyotes are a respected part of Native American storytelling and hold a sacred place in many cultural traditions today.

One of the most misunderstood and maligned native carnivores, the coyote has been persecuted throughout history in North America and yet has aptly adapted to living in diverse ecosystems including populated metropolitan centers such as Toronto, Canada and Chicago in the United States.

The scientific name for the coyote is Canis latrans (western coyote).

Genetics from the Algonquin wolf (Eastern Wolf) and Western Coyote hybridization has evolved into what is commonly referred to as the Eastern Coyote. A rich genetic blending which has led to the Eastern Coyote (e. coyote) often being referenced by scientists as Canis latrans x lycaon and/or Canis latrans var..  This unique and historically significant species began its evolution over a century ago filling an ecological niche. Weight ranges for the slightly larger cousin to the western coyote, are on average between 22- 41 pounds. The coyote is significantly less in body mass to the Algonquin wolf. 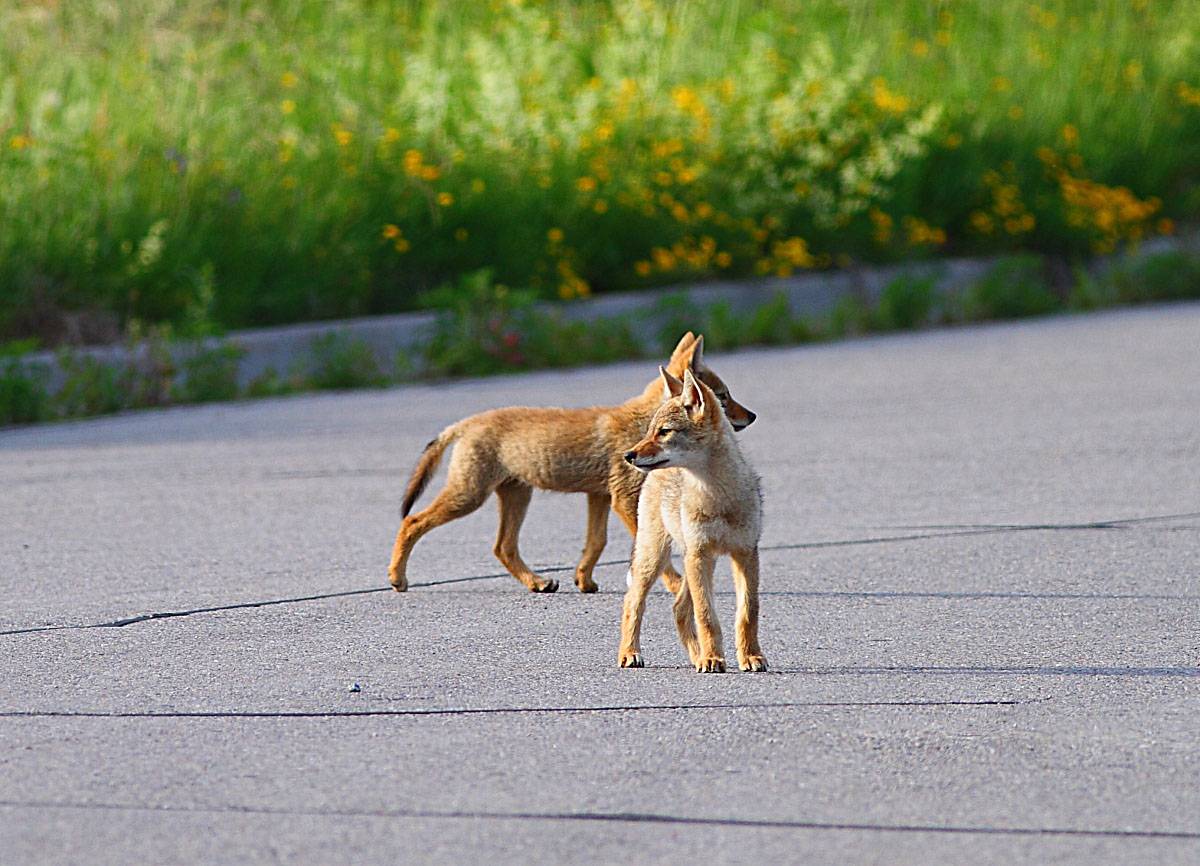 When the breeding or alpha pair is left to thrive, they mate for life. Younger more inexperienced pack members have the potential to start breeding within the first year of life if the alpha pair dies. Coyotes demonstrate a diligent and committed co-parenting style. The alpha male provides the necessary nourishment for the female during denning including regurgitating food for (pups) to consume. Coyotes demonstrate excellent skills as solitary/pair hunters and when rearing pups the alpha male will provide much of the food. Parents are key facilitators in teaching appropriate hunting skills to the pups. Juveniles may disperse in the fall or later during the following spring to establish their own territory. A yearling or beta, may also remain with the pack to help rear next year’s pups. The Creekpark Pack demonstrated this behaviour over a two year period.

Alpha males have been observed leading solitary lives after the death of the alpha female mate. ‘Lone’ or transient individuals may utilize buffer areas around an established territory; however survival is more difficult for these loner animals. Vocalizations such as howls, barks, throat growls, yips and whines are used to communicate between pack and non-pack members; defending territory, distress, warnings, celebration, to locate pack members, mating and mourning. Brief periods of interaction include mating and pup rearing events between former members of the dispersed Creekpark Pack.  During field research our observations demonstrated that vocalizations and proximity tolerance to one another increased during these times.

Although coyotes are classified as carnivores, their foraging and hunting behaviour is described more accurately as opportunistic omnivores. They readily utilize carrion (already dead animals) wherever possible; however, their diet consists of mainly rodents, rabbits, fruit, berries, insects, and geese (eggs). Coyotes can become accustomed to livestock when proper farming methods are ignored. The lack of dead stock removal is a reliable attractant for all carrion feeders, especially coyotes. This can set the stage for future depredation of living stock when good husbandry is ignored.

Coyote sightings are not uncommon in Southern Ontario. Coyotes have been a vital part of our ecosystem for many years. By applying common sense, preventative techniques and by being aware of the diversity of wildlife that we share our community with, we can minimize human and wildlife encounters and conflict. When coyote sightings increase many times these sightings are due to humans intentionally or unintentionally providing a food source and also multiple sightings of the same coyote. Over flowing bird feeders, mishandling of compost, and fallen fruit attract a diverse range of prey species such as rodents, squirrels, chipmunks, insects which coyotes will utilize as food. Consider that the birds and small mammals that frequent bird feeder stations are potential prey food for other predator species such as owls, hawks, fox and domestic pets. New infrastructure such as roads, fences and urbanization impacts how wildlife moves throughout our communities. Urban boundary expansion creates a loss of habitat and green spaces for wildlife.

Common precursors to an increase in encounters and conflict between people and/or dogs are often evident when anthropogenic food sources are present in the landscape. Allowing pets to roam unattended and dogs off leash in green spaces can elevate the risk of encounters and conflict between a domestic dog and wild canine. Intentional or otherwise, feeding coyotes and other wildlife species puts wildlife and pets at-risk. There is a direct impact on canid behaviour including coyote’s returning to a site to access food sources. One step to discourage citizens from acclimatizing canids to a human food source is to implement a Feeding Wildlife By-Law. Communities across Ontario recognize this by-law as an effective, sustainable approach that fosters awareness and responsible stewardship. The ultimate outcome is coexistence.

As an enforceable tool for prevention, implementing a Feeding Wildlife by-law is an accessible option for communities and is another educational strategy that supports front line response personnel such as Law Enforcement, Animal Control and Humane Societies. This type of by-law promotes community engagement and awareness about how to maintain attractant-free businesses, backyards, parks and trail systems.

Coyotes are an integral part of our diversified ecosystem and provide a necessary and healthy prey/predator balance.

Mortality rates are very high for Eastern coyote families with humans having the highest impact, vehicles second. Education initiatives, wildlife proofing property and safety tips that include a factual overview about coyote ecology is beneficial for communities in which they live.

How You Can Help Foster Compassionate Coexistence

* Educate yourself and your community about coyotes.

* Be inspired to organize a Co-flourishing with Coyotes and/or Coyote Wolf Bear Education Initiative event in your community. Contact us to request one of our Coyote Watch Canada (CWC) Outreach Representatives or let us know how we can help to support your local event. Our resources are free to share at the venue.

* Become a strong informed voice for coyotes and other urban and rural wildlife by writing to the media, promoting non-lethal conflict resolution policies to address people and wildlife encounters.

* Encourage city and park officials to endorse and post our beautiful and informative Coyote Awareness Sign or Poster (pictured above).

* Community support through volunteerism is the heartbeat of our organization and the successes we achieve together.

Spot a Coyote? Tell us about it!

Help us keep communities informed. Use the link below to report now.