Government plans will allow Threatened Species to be killed 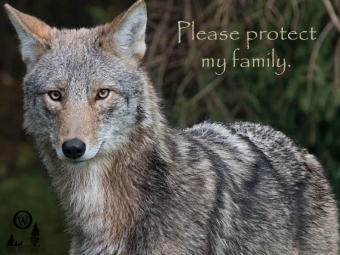 TORONTO, CANADA – (Aug 12 2016).  On Friday July 22, the Ontario government announced plans to allow hunters and trappers to kill at-risk Algonquin wolves across the majority of their range.  The plan requires an erosion of the automatic protection that was said to be afforded by the province’s Endangered Species Act (ESA) following the wolves’ up-listing to Threatened status on June 15th 2016.

Over 165,000 people from around the world have attended the “Public Wolf Howls” in Algonquin Provincial Park for a chance to hear the wolves in the only area where they are fully protected. As few as 154 mature animals, or 65% of the global population, inhabit Ontario.

A large coalition of organizations (see Addendum) has gathered together to call for full protection of Algonquin wolves across their entire range. Algonquin wolves are sparsely distributed across Central Ontario. The groups are urging the public to comment on 2 government proposals (EBR #012-8104 & EBR #012-8105) before Aug 22nd 2016 to ensure the ESA is used to recover the Algonquin wolf population as intended. The coalition stresses the need to extend protection to eastern coyotes and their hybrids, neither of which can be differentiated from Algonquin wolves without a genetic test.

Proposal #012-8104 will limit the ban on wolf and coyote hunting and trapping to three disconnected “core” areas around 3 other provincial parks that currently allow trapping. These closures are too small to support family-based Algonquin wolf packs, reduce coyote interbreeding or protect wide-ranging wolves, which naturally disperse to find new territory and mates in surrounding areas.

“Of the radio-collared Algonquin wolves that dispersed from Algonquin Park’s protection, 80% were killed by hunters or trappers within 1 year,” says Sadie Parr, Executive Director of Wolf Awareness Inc. “It is because of hunting and trapping that so few wolves have been found outside of the “core” areas the government has proposed to protect.”

Proposal #012-8105 will erode the ESA to exempt hunters and trappers from provisions that would otherwise prohibit them from killing, harming and harassing Algonquin wolves. This exemption will apply in all areas outside of the three new closures proposed in #012-8104 and existing closures in and around Algonquin Park.

“Ontario is transparently prioritizing a minority of people who profit from the slaughter of wolves and coyotes over the recovery of a species at risk,” says Hannah Barron, Director of Wildlife Conservation Campaigns for Earthroots.  “It is appalling that the government would continue to ignore their own research showing that without more extensive protection from hunting and trapping, the Algonquin wolf population will not recover.”

“These proposals are marketed to the public as a step in the right direction while we wait for the Recovery Strategy now mandated by the Endangered Species Act,” adds John McDonnell, Executive Director of CPAWS-OV.  “However, a Management Plan, required when the wolves were still listed as Special Concern, has been overdue since 2008. We cannot wait forever.”

The coalition includes the following organizations: